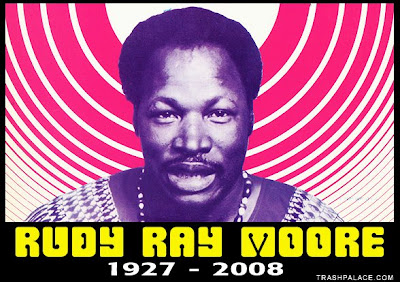 Last Saturday night, just after midnight, I received a phone call from my buddy Bill Baker, a friend and fan of Rudy Ray Moore and his family. Bill told me that Rudy's daughter had called him saying that Mr. Moore's health was rapidly declining and he was not expected to make it through the weekend. Sadly, hours later on Sunday, Rudy Ray Moore, an entertainment icon, passed away. A few of you that know me know what a huge fan of his I am. Indeed, he has been one of my idols for several decades and I will miss him dearly. 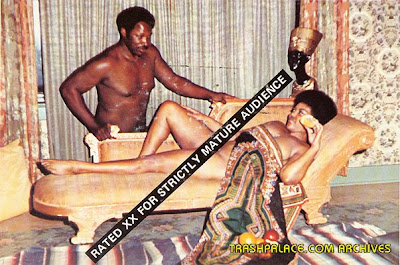 In the early days of home video rentals the Wizard Video label released a trailer collection called "The Best of Sex and Violence" (1985). And it was on this VHS tape that I first discovered Rudy Ray Moore. Amongst the seventies exploitation trailers compiled on there were several Blaxploitation titles including the 3 complete trailers for "Dolemite", "The Human Tornado" and "The Disco Godfather". I remember laughing my ass off at such classic lines as "Bitch! Are you for real!?" and "If you crave satisfaction, this is the place to find that action! Coming to this theater as it's next attraction!". Moore's delivery was really over-the-top and reminded me of a lot of guys that I had gone to school with back in the seventies; kids that were always going around trying to out-badass each other! It wasn't until later that I realized part of his style was an intentional sort-of self-parody. Rudy was having a laugh with his movies and that's part of what makes them great! I remember turning my friends on to the Moore movies and it's funny now to think of a bunch of young white kids in the suburbs running around quoting Dolemite (which we did for years).

Eventually I was able to track down copies of his movies and later I was lucky to find some of his records. A lot of the classic Black "party records" (XXX humor) were only ever sold to adults in urban liquor stores and inner-city record shops so, needless to say, I had never seen any of them before! What always cracked me up was what I call the Rudy Ray Logic of his humor. As Dolemite: "And tell him I want him out of here in 24 hours. And 23 of them are already gone!" A lot of his jokes were much more x-rated then Richard Pryor or anyone else I had heard, but there was this intentional goofiness to them that made it all in fun. Like on his LP called "The Second Rudy Ray Moore Album" (pictured below), a live recording (or, more likely, pseudo-live), Moore is admiring a female member of his audience: "Woman, I sure would like to get in your pants!" "Why?" "'cause I done shit in mine!". Rudy was not just another guttermouth comic but a real genius! 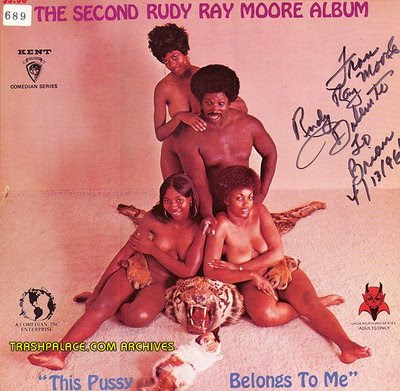 And talk about a do-it-all entertainer, Moore has done live stand-up comedy, released over 22 comedy albums and movie soundtracks on 8-trak, LP, cassette and CD, sang and released records of his rhythm and blues music, written for the movies, acted in his and others' films, directed movies and somehow held onto the rights for most of his stuff. AND he even ran for president! My good friend Chuck Jeffreys, an entertainer and stunt coordinator in the Hollywood industry as well as founder of the martial arts exercise and training company Combatitude, told me that in the seventies Rudy was the first Black actor he ever saw performing Kung Fu in the movies. Already practicing martial arts, Chuck told me that seeing Moore perform in his movies bolstered his want to do the same! Chuck says "Most of the time it was Chinese actors we'd see in the kung fu flicks. Then came Rudy and his over the top performances. This wasn't Bill Cosby in 'I-Spy' This was kinda out there and I wanted to do, THAT.". Mr. Moore has made many appearances at horror and movie conventions and I feel lucky to have gotten to meet him several times. How surreal it was to go to breakfast one weary convention morning and find Dolemite himself pouring the orange juice at the breakfast bar! Some of you might remember in the older printed Trash Palace catalogues I had a "Rudy Ray Moore" section, which was kind of a joke at the time, the idea that he was his own genre of sorts. (I had a "Poster" section, a "Videocassette" section, "a "Record and CD" section and a "Rudy Ray Moore" section.) This was just before Xenon Home Video re-issued his movies for the sell-through market which brought about a new Rudy Ray / Dolemite revival of sorts exposing his work to a slew of new young fans. If any of you are long time Trash Palace customers you may remember getting a Christmas card from me in the mail in 1997 with this photo on it.: 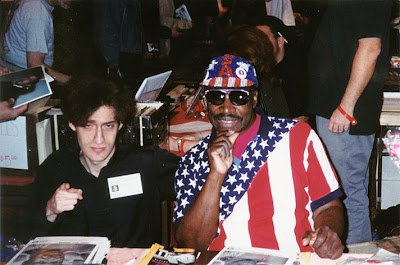 (No, we were NOT stoned in that picture!) That was from the second time I met Mr. Moore at the Chiller Theatre convention in New jersey. I remember just after this photo was taken Rudy tried to teach me the Disco Godfather neck move. ("Put your weight on it!") I never did quite pull it off but it was nice of him to try to teach me anyways. (My chiropractor didn't think it was too nice though.) Around this time Something Weird Video released the excellent Blaxploitation trailer collection called "Afros, Macks and Zodiacs" hosted by Rudy and he was set up at their table helping them promote it. 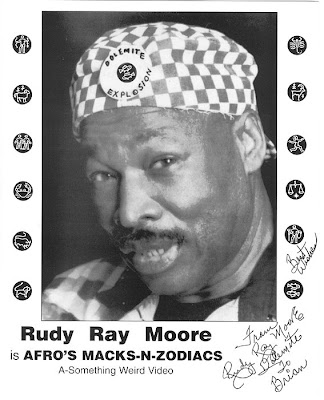 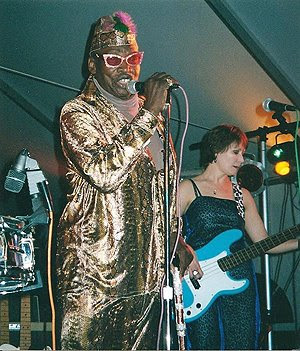 I felt lucky that I was able to track down some of Moore's singing 45's, a few of which have shown up on Norton Records excellent compilation of his RnB tunes called "Hully Gully Fever". But I never would've thought that in 2004 I'd have to opportunity to get him to sing with my band The Ubangis. To say this short appearance was unrehearsed is kind of like saying the Hindenburg was a little balloon accident. Basically, I walked up to Rudy at a Chiller convention a couple of hours before we were scheduled to go on stage and asked him if he wanted to sing and perform with us. He said "Sure!" and although we discussed trying to play his blues song "Easy, Easy Baby" a tiny bit beforehand we never actually had the chance to quite work it out properly. He just showed up at the show, came onstage, and...

As you can hear things were a bit loose, but for me personally it was a dream come true! Rudy hadn't really planned on doing any particular jokes that night, he just pulled them out onstage. He told me afterwords that he noticed a few younger children in the crowd and tried to tone it down. Even I was shocked!: 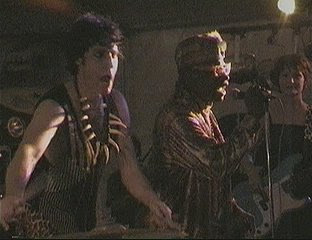 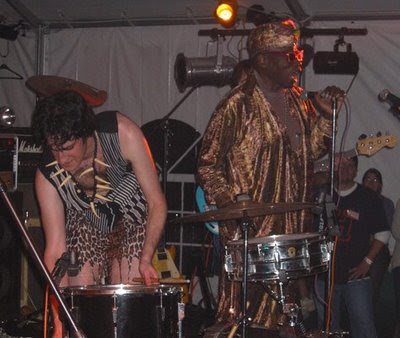 Yes, Rudy Ray Moore is Dolemite! He put his finger in the ground and turned the whole world around! To this day I am in awe of the man and I can't help but think that as time goes on his popularity will continue to grow and grow. And in closing let me say this: Rudy Ray Moore, he may be gone... but THE LEGEND OF MUTHAFUCKIN' DOLEMITE LIVES ON! 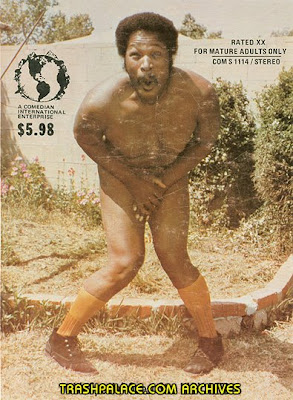 Thanx to Bill Baker for shooting the Rudy / Ubangis video!

What a wonderful tribute to a true entertainment icon. I'll be dusting off some "Dolemite" this evening for sure. The personal anecdotes are awesome, and I'm STILL kicking myself for missing out on the 2004 performance at Chiller!

Very nice tribute, Brian. He will definitely be missed:(

My uncle used to watch all those movies. This guy was in some of the most outrageous fight scenes in movie history. He will live on forever in those films and the music he inspired.

RIP (rest in Pussy) Rudy! He was so awesome. And I had no idea you got him to sing with the Ubangis! That is so cool. Those are great photos.

That's a damned great tribute.
You put your weight on it.

Thanx you guys for the kind words!

Kate- I wouldn't say it was anyone's shining moment (his or ours), but it certainly was spontaneous! (And fun!)

I enjoyed your tribute and loved seeing the video of him with you at Chiller.

Muthafucka, ya done him proud.

I BET WHEN HE GOT HIS CALLIN TO COME ON HOME, DOLEMITE SAID, "MOTHER-FUCKA! YOU GONNA HAVE TO TAKE ME!!!"

YOU KNOW, DOLEMITE ACTUALLY TAUGHT ME AND MY COUSINS SO MUCH! I MET HIM IN 2001 IN COLUMBIA SC. PHILLY AND I DROVE FROM SAV GA TO THERE. WE KICKED IT WITH HIM FOR ABOUT 10-15 BEFORE HE WENT ON STAGE. MEETING HIM WAS A LIFETIME ACCOMPLISHMENT! MISS YA SOUL BROTHER!!! WHEN U GET TO THE HEAVENS, SAY, "GATES!!! WHAT U GONNA DO?!!" THEY GONNA REPLY BACK, "WE GONNA PART MR DOLEMITE... LET YO BAD-ASSS THRU!!!!"

THANK YOU FOR TEACHIN US TO BE OURSELVES