"SPIN ALONG WITH MITCH" ROCKS THE INTERNET! 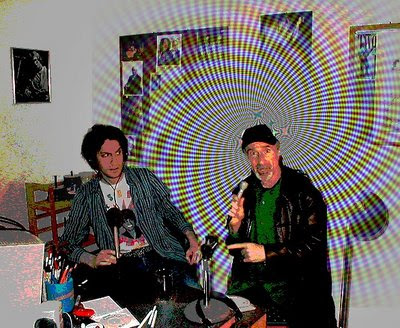 Brian Horrorwitz (left) and rock-n-roll record guru Gary Mitchell (right) spinning it raw and wild!
As was threatened, here is the complete 1 hour webcast from a few days ago, April 15th, 2009, of "Sing Along With Mitch"! (see previous blog entry) Yes, it was only appropriate that coming upon Zero Hour of the tax deadline was the time this 60 minutes of aural decadence was foisted upon the unsuspecting audience. Why? Because, if you listen to this entire thing, you WILL pay for it, baby! Muaaaah-ha-haaaa! Well, Gary said I could supply the oldies records and play whatever I wanted to and he weren't lyin'! We filled up the 1 hour with some choice 50s and 60s RAWk-n-roll and some wiiiild r&b! Gary grilled me on my shady past, Russ Meyer and The Cramps. The 1 hour just seemed to fly by way too fast. Maybe they'll have me back again some day! (hint-hint!) The show was a real blast for me personally and Gary was the host with the most! Thanx Gary!! And a big thanx also to studio tech wizard Lee Michael Demsey, an excellent dj in his own rite, who did a top notch job! Also wanna send a super-squeezy extra-trashy hug to everyone who listened and chimed in with their 2 cents worth on the live chatroom thingy! Was it my imagination or did the music seem to heat things up a bit in there? By the end it seemed like all hell was breaking loose! Topshelfoldies.com, YOU ROCK! 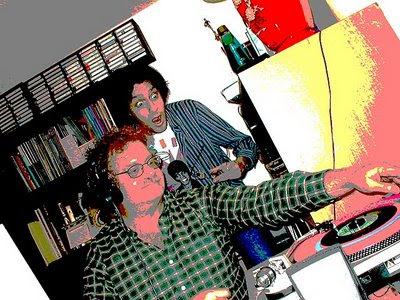 Horrorwitz stands in awe at the dazzling handiwork of wax flipper extraordinaire Lee Michael Demsey!
You can listen to the entire show here:

If you prefer to play the show from your Media Player click here.

Or you can download the program by right clicking here and saving the file to your hard drive.
Posted by Brian D. Horrorwitz at 4:00 AM 3 comments:

SPINNING THE TRASH WAX ON "TOP SHELF OLDIES" WITH MITCHELL AND HORRORWITZ! 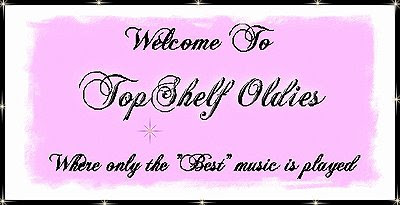 This Wednesday night, April 15th, from 9pm to 10pm (East Coast time) I will be a guest on the online oldies music program "Spin Along With Mitch"! Hosted by obscure oldies wizard Gary Mitchell, "Spin..." is one of many amazing rock-n-roll music show broadcasts heard every night on the web station Top Shelf Oldies, a great place to hear some obscure rock, doowop, r&b, etc.. Gary had asked me to be a guest for 1 hour and said I could provide all the music! Nyaaa ha-haaa! I've dug deep into the Trash Palace 45 and LP archives to bring you a smattering of wicked wax that'll knock you on your keester, baby! So if you're into wild rock-n-roll and r&b please check it out. After the show is broadcast (or whatever they call these online things... "webcast"?) I will be posting the entire program here on this blog for your listening seizure. Er... pleasure! In addition to the rare rockin' records we'll be throwin' at ya Gary will also be throwing a few questions at me about bands I've played in and who knows what the hell else. One music set will be a tribute to Lux and the Cramps, plus a few surprises! And who the hell doesn't like surprises, eh? And, if you are so inclined, you can also take part in the live chat room that's happenin' during the show to voice compliments / complaints / death threats / marriage proposals / etc. Check out their website at http://www.topshelfoldies.com/ , click on one of the "Listen Here" links using your choice of program and the streamin' steamin' sounds of "Spin Along With Mitch" (and Horrorwitz) will fill the room! Or, check back at this spot at a later date and listen to the show after the webcast. Either way it'll rock your day!
Posted by Brian D. Horrorwitz at 5:10 PM No comments: 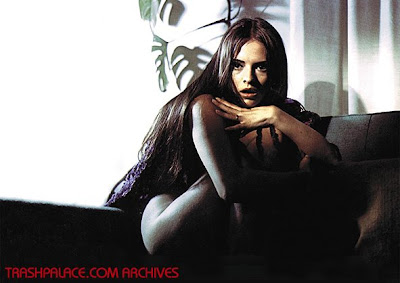 My close friend Dr. Penis has recently posted a blog about the 1996 "3 Films By Jess Franco" CD release, it's original 1969 source LPs and the subsequent re-releases under the "Vampyros Lesbos" title. Unfortunately the complete version of the CD featuring all of the music has been out of circulation for many years now. But if you check out the article over at his Purple Zombie DJ blog you can download it there for free! This psyche-pop music composed and released on 2 LPs in Germany circa 1969 by Manfred Hübler and Siegfried Schwab was a surprise indie hit when re-released on LP and CD in 1996 and pretty much then jump-started the entire Euro-trash soundtrack / pop / lounge music craze! I myself remember being given a cassette of this back then by my buddy Joe Johnson (creator of the ahead-of-it's-time way-cool fanzine "3:AM"). At first listen I didn't really know how to take it. It had rock elements but wasn't really rock. There was a psychedelic / experimental side to it but then it had a pop sound as well. After 2 or 3 listenings I was hooked! It became one of my fave soundtracks ever and I never get tired of listening to it. I remember tracking down fuzzy looking VHS bootlegs of the 3 Jess Franco German movies that the music was used for ("She Killed in Ecstasy", "Vampyros Lesbos" and "The Devil Came From Akasava"). None of these movies were subtitled and despite my lack of understanding most of the German dialogue I probably watched those tapes 10 times each! A big part of the appeal was finally seeing / hearing how the music was used in each film. Franco was always pretty progressive when it came to sometimes mixing in modern music with his movie scores. Somehow using these prog-ish and at the time modern sounds worked for those movies and set a whole new flavor to the way Euro-exploitation movies sounded. Franco had already used music by Manfred Mann in his "Venus In Furs" (aka "Paroxismus", 1970) and would go on to direct "Killer Barbys" (1996), a gothic horror flick featuring music by and starring the titular Spanish garage punkers of the same name, as well as "Tender Flesh" (1997) which featured music by the heavily under rated Spanish rock band Sexy Sadie. Not to mention "Vampire Blues" which was scored by my band The Ubangis. "Vampire Blues", like "Vampyros Lesbos", was another lesbian re-telling of the Dracula story. Only Jess Franco could have come up with the idea of telling these kinds of stories using rock music as a sonic backdrop!

If you have any interest in movie soundtracks, psychedelia, strange pop music, Jess Franco or Euro-trash films then the original complete "3 Films by Jess Franco" CD is required listening folks! GO GET IT NOW while you can!