THE IMPORTANCE OF LUX INTERIOR, IVY RORSCHACH AND THE CRAMPS 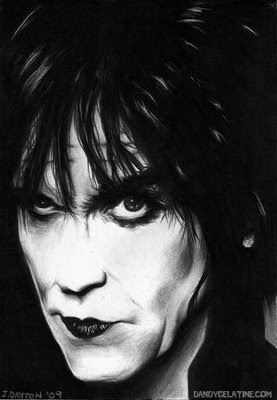 ILLUSTRATION BY JENNY DAYTON
This past month I have been trying to sort things out, trying to find the words to say, trying to figure it out. Lux's sudden death threw me into a saddened daze that I haven't quite completely recovered from yet. I had just been emailing with Lux and having him gone all of the sudden was hard to grasp. I talked to friends and surfed the web looking for answers, seeing what other people had to say. And I ended up on the official Cramps website where a statement is posted about Lux's passing along with a link to Lux's favorite charity the Best Friends Animal Society. And, in the middle of the page, a link to a guestbook, "Lux's Guestbook" as it's called, where already over 4,600 people have left their messages of praise and condolence. So many people have written so many incredible, beautiful things on there. And while reading some of these I noticed something; besides the fan adulation that many of us have for The Cramps, I couldn't help but also notice the large number of people that had expressed how influential the band was in pointing them towards other older bands and artists, in changing their very lives. Here is a quote from a guy in Germany: "Back in '87...the Cramps, the Goo Goo Muck and the Human Fly unexpectedly blasted my mind and changed my view on music itself." A man in the USA wrote "You changed my life and made me realize it was okay to be different and follow your heart." And so you get the idea. And as I was reading through "Lux's Guestbook" I realized that of all the bands in contemporary music history, the Cramps are probably the single most influential group I know of when it comes to turning people on to other's music! And I believe, in looking back to my younger years, that I am one of those people that got infected by Lux & Ivy's rock-n-roll disease as well. Allow me to 'splain... 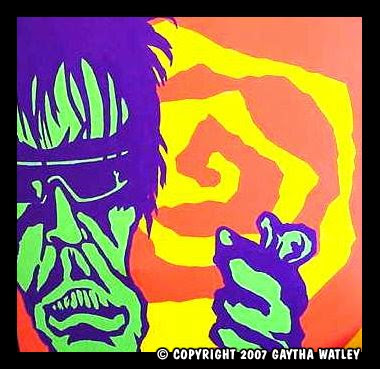 PAINTING BY GAYTHA WATLEY
I myself first heard the Cramps in 1978 whilst turning the radio dial passing through different stations at random and happen to accidentally stumble upon the song "Human Fly" on station WGTB. I didn't know quite what to make of it! I was already fairly familiar with Elvis and some other classic "oldies" artists that you'd usually hear on the radio and I could hear a kind of influence. But this... this was a new kind of beast altogether! It sounded old AND new. I mean, it had an Elvis-ish feel to it but a kind of twisted subverted freaked-out messed-up Elvis-gone-off-his-meds version of Elvis' music. Jerry Lee Lewis played at the wrong speed whilst going off his nut... something very new to my ears and yet with that sense of "oldies" familiarity as well. Then in 1980 my buddy Mike loaned me his "Songs the Lord Taught Us" LP and, for me, that was all she wrote. And as I started buying Cramps records little did I initially realize I was also listening to songs written by The Sonics, Hasil Adkins, Ronnie Dawson, Roy Orbison, The Trashmen and on and on. Listening to a Cramps album was like experiencing a kind of subliminal history lesson of cool fucked-up music even though you didn't realize it at the time. For many of us this was the first time we'd hear songs by these artists. I mean it wasn't like there were many other (if any other) bands running around performing obscure covers of tunes like "Primitive" by The Groupies, songs often only ever released on records that were way obscure and out-of-print. It wasn't like you'd hear a song such as "Strychnine" by The Sonics on any of the FM stations in between whatever bullshit top 40 crap they were spinning at the time. The Cramps, by forming their group out of their love for obscure, raw rock-n-roll music, inadvertently ended up exposing thousands of fans world wide to songs, artists, styles, groups and even movies that were Lux and Ivy's original inspiration for wanting to perform in the first place. I'll bet quite a few people had never seen "Faster, Pussycat! Kill! Kill!" when The Cramps first performed and recorded the theme song live but by now probably many that heard it first from them have seen the flick. Would we know "Goo Goo Muck" by Ronnie Cook & Gaylads, "Love Me" by The Phantom or "She Said" by Hasil Adkins if it weren't for them? (Adkins who, ironically, would have his career resurrected via ex-Cramps drummer Miriam Linna's record label Norton, co-owned and managed with her husband Billy Miller, both founders of the amazing band The A-Bones.) Quite probably we would not know those slabs of wax were not it for The Cramps covers. And who can say how many people went and formed new bands after being exposed to The Cramps' music? Yes, the Cramps tied it all together... the obscure rockabilly, the rare garage, the blues, the b-movie themes... the trashy horror, the sexual innuendos... tied it all together in one big garbage bag, swallowed it whole, and barfed it back in our faces! I don't know if they were consciously trying to hip people to this stuff necessarily, but hipped they did and, as far as I can tell, they have done so more than any other band ever. Besides creating their own new sound and lyric style, besides releasing classic records and the many wild live shows they've performed, the Cramps have also given us their "disease"; they've passed along their love for the raw, early rock-n-roll sounds that, like The Cramps own music, continue to inspire today. Their love for the raw, the primitive,... that shit's the real deal motherfuckers! "Human Fly" and all the other great Cramps records ever since sound as fresh to me as the first day I heard them. To me their music will never get old and those sounds will keep Lux, Ivy and all of the other Cramps alive forever!

In closing I wanna say a few final things without getting too mushy. I am as big a Cramps fan as anybody. We all know Lux the wildman as we've seen onstage. The stripping, slithering, stage-humping amp climber,... the groaning, gurgling mic fellator... But I want to tell you about another side. Folks, this is not just some bullshit "we love you because you're dead" spiel. I've known Lux & Ivy for many years, but never really knew him well until these past several. I am not trying to name drop nor am I trying to sweeten things up as far as what I feel about him because he has passed away. I am telling you, straight up, Lux was a very sweet, smart, encouraging, caring and humble person with a truly savage wit. The fact that his favorite charity is what it is (Best Friends Animal Society) should give you a clue about the kind of person he was. Without getting overly sentimental I will leave it at that. Beyond the wildness of The Cramps which was also a very real side of Lux, he was too, as I knew him these final years, just a really decent guy who left us way too fucking soon. Lux was a one of a kind. I'll miss you buddy.

Thanx to Jenny Dayton and Gaytha Watley for allowing me to post their artwork.