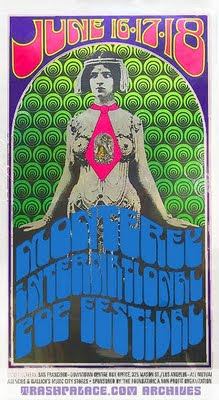 With all the hubbub over the 40 year anniversary of Woodstock and this weekend's release of Ang Lee's "Taking Woodstock" movie, I thought I'd throw up a little blurb about a sometimes ignored concert event that, to me, was just as important and MUCH more entertaining; The Monterey International Pop Festival held June 16th to 18th, 1968. The 3 day festival, the first of it's kind, laid the blueprints for the vastly inferior (in my opinion) Woodstock festival. The diverse lineup exposed many "new" talents who would go on to great success. The event was shot and released as a feature film, directed by the talented D. A. Pennebaker. Although not every act that performed made it into the final cut, the ones that did were pretty amazing and, in some cases, at their peak performance-wise: Big Brother featuring "recent discovery" Janis Joplin, a "pre-Tommy" The Who still in their snotty Mod mode, Otis Redding backed up by Booker T and the MGs (it don't get better than that, baby!), Jimi Hendrix, Hugh Masekela, Ravi Shanker introducing the west to sitar music, and others. Around 1976, when I was a little 11 year old snot-nose, I had the good fortune of taking a music class in middle school who's teacher, although a bit of a hot-head, was fairly hip. He'd often show us movies like this one that would have a resounding effect on me later in life. The thing that stuck with me the most about the Monterey Pop movie was the performance by The Who which ends in total destruction of their amplifiers, drums, guitars, etc.. I had never seen anything quite like it! For a 1968 "Love festival" type of event this was pretty eye opening to say the least! 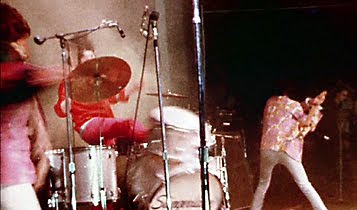 "This is where it all ends." 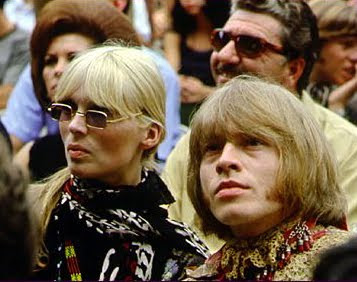 Nico and Brian Jones digging the grooves.
Otis Redding seemed to steal the show and the star-studded audience was simply blown away! A few years later when I viewed the Woodstock movie I was pretty let down. To me it seemed overly long, self-indulgent and just plain boring a lot of the time. The Who's performance at Woodstock for instance, which they've acknowledged was not among their best, seemed bland and a bit pretentious by comparison, like they'd become "important" rock mega-stars all of the sudden. I suppose this is all just a matter of opinion. But if you have any interest in music and pop culture, you should really check out the Criterion label's 3 disc DVD box set with book that came out a couple of years back. It presents the original feature plus the full sets by Jimi Hendrix and Otis Redding and unused band footage, unseen until this DVD release, which includes several of the groups that didn't make it into the feature film. 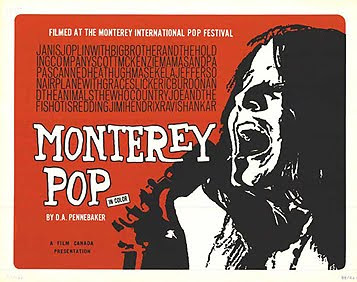 Check out the original theatrical trailer below! (Look for The Monkees' Mickey Dolenz in the audience.):
Posted by Brian D. Horrorwitz at 8:56 PM 4 comments: 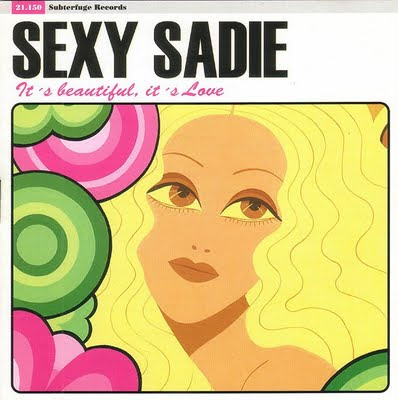 TUNE OF THE MOMENT: "WITCH-A-MA-JIG SONG" by SMILIN' ED MCCONNELL AND HIS BUSTER BROWN GANG 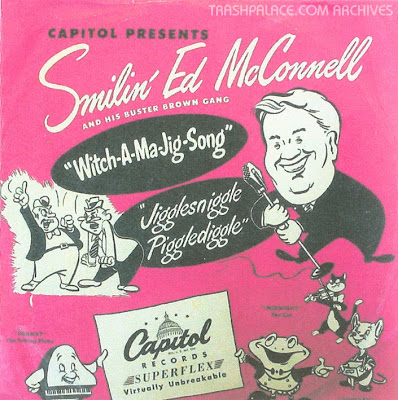 Back in the 1940s Capitol records released an entertaining series of 10-inch 78 rpm records for kids. Some were singles with one song or skit on each side while others were released in booked sets of 3 records. When I was a kid I inherited a few of these from my parents including a nifty 3 record set featuring Bugs Bunny, Porky Pig (in Africa!) and their pals. They were all expertly voiced by Mel Blanc with an amazing orchestrated score and sound effects. They really put a lot of work into these "kids" records and I was lucky my parents gave this to me along with a few others. One Capitol kids' 78 I did not receive was "The Witch-A-Ma-Jig Song" recorded by Smilin' Ed McConnell and his Buster Brown Gang. If they had given me this record I probably would've had nightmares for weeks. Smilin' Ed was a radio personality who, amongst other things, had a kids program that reportedly ran from 1944 to 1953 that was sponsored by Buster Brown Shoes. One of his characters was Froggy the Gremlin whom you may have heard of. There's something truly demonic sounding about Froggy's grumbly throat-cancer-esque voice that gives me the willies! In any case, Ed, Froggy and the whole gang eventually ended up with a television series that was later run by Andy Devine. Somewhere along the way the catch phrase "Pluck my magic twanger" was born. As for the record, it speaks for itself.

You can also play the record on your Media Player by clicking here.
Posted by Brian D. Horrorwitz at 8:11 PM 2 comments: