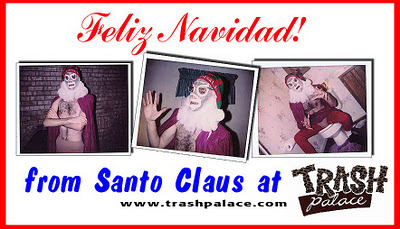 Posted by Brian D. Horrorwitz at 2:32 AM No comments:

TUNE OF THE MOMENT: "CHICKENS FOR CHRISTMAS" by THE UBANGIS

"Chickens for Christmas" is the Xmas side of The Ubangis amazing holiday 7" single from 1993 on DeCeased / Brutarian Records split label. The b-side is "(She's A) Yamakah Mama (At Hanukkah Time)". "Chickens..." also appeared on a local Xmas CD comp called "It's A Rockin' Christmas" on the Run Wild Records label.

Appearing on this Rockabilly track are yers truly (Brian Horrorwitz) on lead vocals and drums and "Saucy" Randy Manos on guitars, bass and backup vocals. (UMF had yet to join the band but came along soon sfter.) The single was recorded in 1 take on 1/4 inch reel-to-reel tape by Carl Merson at his Beware Of Dog studios in Silver Spring, Maryland. Yes, 1/4 inch reel-to-reel! This is what all Rockabilly should sound like you twerps! Look, even the chicken liked it! Ah... whaddoiknow...

The dancing chicken footage was "borrowed" from the Werner Herzog movie "Stroszek".

And now, the lovely lyrics:

Well I gotta drop that old Kris Kringle a line
My heart's all a-tingle, got a Christmas wish so fine
It's kind of fowl but with a little luck
He'll bring me some brand new friends who go cluck
Come on Santa Claus
I'm asking ya please....
Give me chickens for Christmas

You know I'm gonna love each hen that old Saint Nick sends
I won't eat none of them, not my fine feathered friends
I'll love them so, this is my Christmas wish
I promise Santa they won't end up on a dish
Come on Santa Claus
All I'm askin' is please...
Give me some chickens for Christmas

Come on Santa Claus
I'm beggin' ya, please...
Send me chickens for Christmas

On Christmas Day we'll have a Jingle Bell wing-ding sing-a-long
Drinkin' egg nog a-pluckin' and a-cluckin' to a Christmas song
They'll be happy as can be
And on New Year's Eve I'm gonna set 'em free
Oh, please, Santa Claus
Won't you hear my plea

And give me chickens for Christmas (x3)
Posted by Brian D. Horrorwitz at 2:55 AM 1 comment: 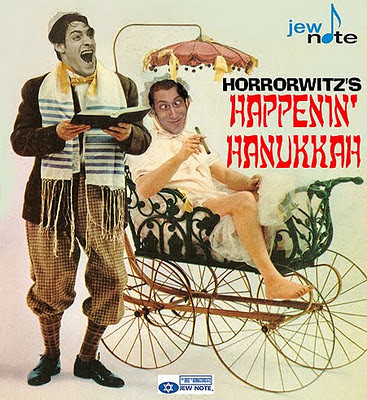 It's here! The best darn Hanukkah music comp in this blog! 20 holiday tunes to get you twisting', swingin' and rockin'! So good you'll plotz! And you don't even need to be Jewish to enjoy it (but it couldn't hurt)! Not available in any music store or deli. Download from this link! And feel free to inflict it, er... share it with someone you like! The download includes all 20 tracks in mp3 file format plus the front and back cover!

(Note: This compilation is G-Rated and is okay for all ages, provided you don't mind tormenting young people slightly.)
Posted by Brian D. Horrorwitz at 2:07 AM No comments:

In the fall of 1982 I dj'd a "video dance party" at Montgomery College on Rockville, Maryland. It was the first of it's kind on the campus. I borrowed some portable vcr's from a friend who ran a small business shooting wedding videos. And as for the music videos themselves we had to take what we could find. I had a beta tape recording of the very first MTV broadcast which included Devo and The Buggles. Also someone at Peaches Records donated a couple of promo videocassettes. One had several music video's for David Bowie's under rated "Lodger" LP. The other, I vaguely recall, was a mixture and included this new wave chap who called himself Shrink. I had remembered seeing his mini LP at a record store. He had his face and head painted up gold, the hair on half his head was shaved while the other half was spiked. By this point I was already into The Bad Brains, The Ramones, Sex Pistols, Stranglers, The Residents, Black Flag and so on. And so my friends and I thought this Shrink was pretty goofy at the time. But the funny thing is that when I hear this song now I think it sounds pretty fucking good! Especially when compared to some of the horsehit being passed off as rock music these days. "Valid or Void" has a sort of glam-punk sound that is kinda' catchy. I've dug deep into the Trash Palace archives and dug up my beta tape dub to present you with what I believe is the Internet debut of the lost music video for Shrink's "Valid or Void". The sound is a bit low so crank it up!

I dunno what the story was with Shrink or where he's gone off to. I guess he never made it too big but seems to have a small cult following of people that remember him. He did appear on tv at least 1 time. Check out this live clip which I found online from a Netherlands website. What must these people in the audience have thought?

This is the shit! Come back Shrink! We need you now more than ever!!
Posted by Brian D. Horrorwitz at 2:17 AM 3 comments: