One glorious day in the early 1970s: My Mom took me to a movie theater in a suburban strip shopping center in Laurel, Maryland to see the bleak sci-fi flick "Soylent Green". I was no older then 10 years old. If it was the original release of the movie then I would have to have been 8 years old but I can't remember for sure. What I do remember is that film pretty much blew my mind. (Little did I realize that by the time I was 40 this country would, in some ways, be living out "Soylent Green"! But I digest...) After the movie my Mother and I walked across the way and went into a bookstore. Once inside first thing I really noticed were several horror movie books including Dennis Gifford's infamous "A Pictorial History of Horror Movies", a book which a lot of you probably own, especially if you are over 40. I then noticed what appeared to be a large stack of innocent looking magazines on a table. But as I walked over and the top cover came into view, what I saw was not so innocent! What lay before me was the most colorful, lurid and bloody thing I could have ever - and had NEVER - imagined! As I picked up the top magazine and gazed upon it's gruesomeness, I fell into a stunned silence, a sort of cross between shock and orgasm (at least as far as an 8 year old is concerned). What the hell were these things? I lifted the top magazine off of the pile and then noticed that the magazine underneath was a different issue, indeed an entirely different title altogether, but with that same style of grizzly cover art! As I picked up the second magazine and noticed yet a third similar styled one underneath, I suddenly realized that the entire stack of 50 or 60 mags were all different issues! What a discovery! A huge heaping pile of beasts, blood and babes! "M-m-m-mom..." I muttered. My Mother approached. "PLEASE!! OH, PLEASE!! Can I PLEASE have one? PLEASE PLEASE PLEASE!" I cried out in my best James Brown impersonation. "For the love of GOD, woman! PLEEEEEEEEEEEEEASE!!!" My mother picked up one of the magazines and looked at it. And in a that moment, a split-second combination of love and dysfunction, a decision was made that would indeed change my life, point me towards the path of sleaze and perversion, and cause Dr. Frederick Wertham 1 more roll in his Godforsaken grave (look it up), she muttered the words which I so longed to hear: "Okay, Brian, you can pick out one." Oh, YEEEEES!! Oh, THANK YOU!!" I cried, "THAAAAAANK YOOOOOU!!". I spent the next 10 minutes going through the entire stack several times, carefully studying each cover like they were some kinds of unearthed ancient artifacts from a lost tribe, rare treasures dug up from the tomb of Tut, some kinds of face-stained shrouds of some exploited Deity... Yes, I had discovered that, indeed, there WAS a God and I had the proof in my own little mits, baby! I took my time since I could, after all, only choose one. And I had to make sure it was THE one! And after studying each cover very, very closely, I decided on... Yes, that was the fateful day I had discovered the "Picto-Fiction" world of the mysterious "Eerie Publications", some of the shittiest horror comics ever drawn with some of the goriest and most outrageous covers ever painted! Over the following years I'd occasionally but rarely stumble on a few issues here and there, and each time it was like uncovering a wonderful golden turd! With titles like "Weird Vampire Tales", "Tales of Voodoo", "Terror Tales", "Tales from the Tomb", "Witches Tales",... you get the idea. It wasn't until a road trip to New York City circa 1984 that lead me to a small comic book store in the Village where I was able to score about 100 of these things for only around $1 to $2 each! A motherload of monsters!! How lucky I felt to find so many at one time and in one place too! But how could this possibly happen? Why weren't these already snapped up? You see, truth is, back then no one really cared about trash like this. These weren't considered "collectible" comics. These were disposable horrors, the McDonald's of comic books, meant to be consumed quickly and then shat into the toilet of terror turds, flushed away to the sea of unwanted comics along with Archie, Big Boy and all the other non-collectibles. Indeed these were third-rate imitations of classier (I say "classier", not necessarily "classy" mind you) comic mags like Warren Publications "Creepy", "Eerie" and "Vampirella" and Skywald's "Nightmare", "Psycho" and "Scream". All decent rags in their own right. And yet, there was something about these others, these monster mavericks... they were trashier imitations of the trash they tried to copy... like they were saying "Fuck it! We know we're garbage, so let's just crank the shit up!". Having so many at this point I then discovered that the mags were pretty much interchangeable, that the stories were continuously reprinted from issue to issue regardless of the title. In fact some of these stories were already reprinted from 1950s pre-code comic books. Occasionally some of the art would even be touched-up to appear gorier then how it was originally published earlier! And the violence could be outrageous on a surreal level. Many times in these stories, for example, someone would get a knife in the neck or an axe in the back and that would cause their eyeball would fly out! Bet you didn't know that could happen, did you doc? The art itself was usually pretty poor, but a few of them, especially around the late '60s / early '70s, did have their own cool style, but those were few and far between. One memorable tale, "Blood Bath" (seen below), told of the horrors of LSD. To this day I have yet to try the shit! I mean,... can you blame me? And the story titles... "The Slime Creatures", "A Head Full Of Snakes", "The Skin Crawlers", "The Blood Dripping Head"... I mean, did they just have a board on the wall with 30 or 40 horrific words written on them and throw darts at it? I also noticed that the cover art was very often re-used and re-re-used, sometimes cut-up where just parts of them were re-used, sometimes older parts were combined with parts of other older covers, sometimes they'd be the same monsters but re-drawn entirely! This was nutso! In later issues the cover art seemed to be often re-printed on the inside cover in black and white. There was no rhyme or reason to it. Even the numbering of the issues made no sense. And there seemed to be this endless array of different covers too! To this day I am still discovering new ones I hadn't seen before! Years later I xeroxed one of my favorite covers (seen below) to make a flyer for my band Date Bait for our first ever gig, Halloween weekend (natch), 1988. I mean, check it out: You have a mad scientist transplanting a brain into a Frankenstein monster while a vampire and a werewolf grapple with a stacked redhead! What a glorious monster mess! The closest things to rival these excessive cover overloads of famous creatures were a few films by directors Al Adamson, Jess Franco and Paul Naschy. Someone needs to publish a nice full-color book showcasing every cover! Are you listening Taschen? Hey, I can dream, can't I?

In conclusion all I can say is... Thanks Mom!

YOU DIDN'T AXE FOR IT! Okay kids! It's contest time! Each week (or so) I'll post a mystery song, photo, smell, etc. and it's up to you to guess what it be! Yes, YOU DIDN'T AXE FOR IT... but here it comes none the less! AND NOW, listen to this weird li'l ditty if you dare! :

What could it be? An unreleased recording of The Ventures on acid? Go-go music from Uranus? Cubby Broccoli's funeral march? The answer may astound you! It may amaze you! Why, it may even cause you to unexpectedly unload your waste at an inappropriate time thus soiling your garments! And yes, the first person who can name this tune correctly will win... (pause for dramatic effect)... ABSOLUTELY NOTHING! Except the instant gratification that you were the first one to get it right! The answer will be posted here soon! WOW!!

EDIT (August 13th, 2008) - Clue #3: Okay, here's the last hint; The theme to this movie appears in the English dubbed US release during the opening credits and is NOT heard at all in it's original Japanese release. Hmmm... what could it be?

Labels: music, rock-n-roll, you didn't axe for it 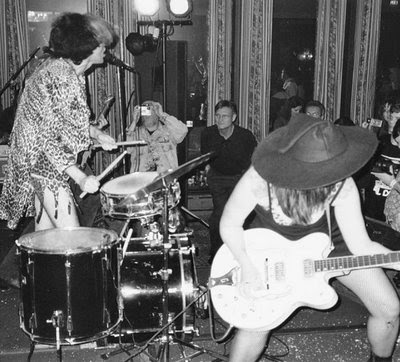 Actually, this should be called "John Phillip Law Upstages The Ubangis"! After the recent and unexpected passing of John Phillip Law, I had mentioned this video in a prior post ("Diabolik Says Goodbye") of Mr. Law goofing around during a Ubangis soundcheck. I then had many requests (well, at least one bloke asked for it!) to post the clip and, so, here it is! This was recorded live late one intoxicated Saturday night over Halloween weekend in 1998 at the Chiller Theatre horror convention in New Jersey. Things were very hectic and I was running around totally focused on getting the band gear setup and completely oblivious to the facts that 1. there was a man sitting right in front of me at the edge of the stage doing wacky things and 2. said man was John Phillip Law! And I especially should have noticed because I had just gotten his autograph that weekend! In fact I had no idea any of this was going on until I saw a videotape of the gig a week later. Not having seen the tape for many years until today it was a bit different then I had remembered when describing it in the previous JPL post. The giant plastic bones you see him messing with incidentally were prop drumticks that I played with at the start of the gig. Later on in the clip Law can be seen watching our act as we perform the instrumental number "Microphonic Nightmare". The band members at the time were myself, Saucy Randy Manos, Kevin "Sexual Chocolate" Hall (who played a handful of gigs on bass with us around that time), and Jill Grable Barnett who had left the band 5 years prior to start a family but returned for this special gig. Sadly, Jill too has also passed on. Back then, during those surreal and wonderful moments, I couldn't ever imagine those people ever leaving this place. I feel very lucky this was all caught on tape at least so I can look back on what seems now like some far-out dream. The cameras that night were operated by Stephen Blickenstaff, Eric Pugliese and Adam Strausner.