THE SOUND OF VIOLENCE

Recently I was re-watching William Peter Blatty's quirky movie The Ninth Configuration, an under rated thriller of sorts from 1980 that is rather hard to pin a label on. And there's this intense scene where lead Stacey Keach, as the seemingly pacified Col. Vincent Kane, gets badgered into a bar fight with a group of nasty bikers with bad eye liner. Kane is pushed and pushed to the very edge of tolerance and finally, when he snaps, he lets loose a "gut wrenching scream" that sounded strangely familiar to me. A sort of deja boo!, as it were. In fact I was quite sure I had heard it many times in other movies or tv shows. One for certain was the over-the-top comedy series Wonder Showzen which seemed to have use it several times. Later I was reading what comments people had made about Ninth Configuration on the imdb message board when, lo a behold, a discusion of said scream included a link to a website called Not The Wilhem Scream. Yes, an entire website that is a tribute to that same one scream. The scream which, incidentally (and thanks to them), can be heard here:

Once you visit this website and learn the history of the scream I know that you, like myself, will sleep better tonight. God bless.
Posted by Brian D. Horrorwitz at 1:19 AM No comments:

Jason Willis of the legendary Scarstuff monster record blog has just posted the most amazing video on youtube and it is being re-posted here below with his permission.

Some of you might remember my blog last year about the Eerie Publications and how a copy of "Weird" magazine blew my little 8 year old mind out back in the Summer of 1973. Well Jason has taken a bunch of that great cover art and made an animation set to the sounds of the Johnson Smith horror sound effects record from the 1970s. I myself remember originally hearing this record in the '70s when my friend David Balaban ordered it from a comic book. The first side was your standard ghost and thunder type effects. But the second side really cuts loose with demons, banshees, space aliens and a torture chamber. Even as young kids we thought that it sounded so ultra-cheezy, with flubbed lines and effects that sounded like it was recorded by 2 drunk dudes in a large bathroom on their lunch break from the office. But that didn't keep us from playing it several times over! The record ends with Krishtor the alien threatening to destroy the Earth. I used to leave that as the my outgoing message of my answering machine. I later learned that much of the Johnson Smith 7" was lifted from a full length LP called "Spook Stuff" which I was later lucky enough to find on eBay. Anywho, I was thinking of posting the record on the Trash Palace blog when I stumbled across Jason's great video which I gratefully re-post here! (Thanx Jason!)
Posted by Brian D. Horrorwitz at 5:47 PM 1 comment:

This Sat. October 30th Trash Palace will be providing the monster wallpaper videos at this wild upcoming event which also features a live performance by our in-house cave-stompers The Ubangis! If you are anywhere in or near Washington, DC this Halloween weekend you could do worse then to attend... 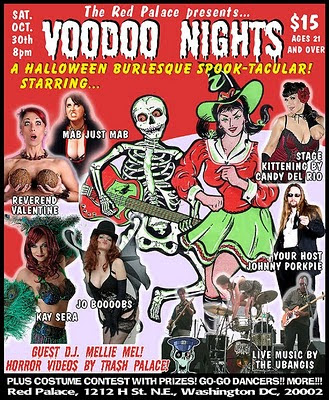 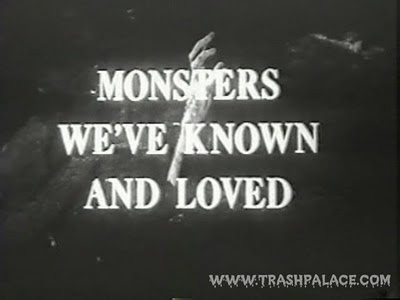 Around 1970 I remember seeing a re-broadcast of this black & white 25 minute tv special when I was just a kid. I didn't realize it was an episode of a 1963 tv series called "Hollywood and the Stars". If I recall, it ran one Saturday afternoon on our local UHF station WDCA - Channel 20 - in Washington, DC, in between a few old horror movies. (Thank you Dick Dyzell!) 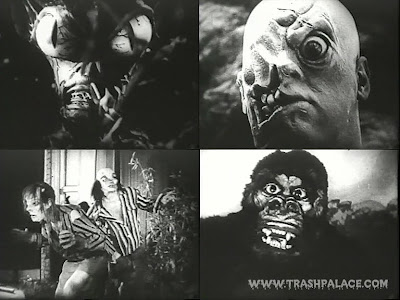 This fun collection of clips ranging from monsters of the silent movie era to classic Universal-type monsters to the z-budget zombies of Ray Dennis Steckler's "Incredibly Strange Creatures..." cult flick, from classic horror stars to giant monsters, is a long time fave of mine. And as I didn't see it posted online anywhere I thought I'd slap it up just in time for Halloween. And so, in the words of narrator Joseph Cotten, "Now, don't send the children to bed. We want all of you to meet... Monsters We've Known And Loved."!


LINKS:
Buy Monsters We've Known And Loved along with the 1944 feature film Cry of the Werewolf, both on 1 DVD-R, at Trash Palace here!

Hollywood And The Stars on the Internet Movie Database at www.imdb.com/title/tt0056765/
Posted by Brian D. Horrorwitz at 11:03 PM 2 comments: