I WAS A PRE-TEEN WEREWOLF! plus: YOU DIDN'T AXE FOR IT!

When I was a wee little monster my parents would often encourage my interest in dinosaurs, spooks and such. And being an only child I was maybe, oh, a little tiny bit spoiled. Particularly when Halloween came around! Being just 3 days before my birthday, each year my parents would let me pick a birthday present and quite often it was something monster-ous since that's what was out there at that particular time of year. And so I picked up an interest at one point in monster makeup. Although I had seen it advertised in the backs of some monster magazines, I hadn't yet picked up the popular Dick Smith makeup book for kids which was pretty complicated for a child. In Elementary School they would sometimes have these new book sales for the kiddies, and in 1975 I purchased one called simply "Movie Monsters" (Scholastic, 1975) written by Alan Ormsby. 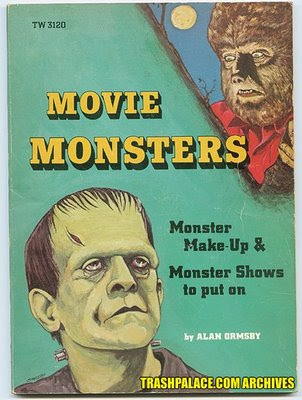 I'm guessing that some of you reading this picked that one up too, especially if you are around 40 to 45 years old now. This great little 80 page book had 3 sections: A brief history of movie monsters with black & white photos, 10 very cool monster makeup ideas, and a script to put on your own live monster show! The makeup ideas were great for young people; very innovative and effective without being too complex. So for Halloween in 1976 I chose the Wolfman makeup. I was 11 years old. My 6th Grade teacher, Mr. Teitelbaum, was quite indulgent and allowed me to use the projector room / storage closet as a private dressing room. I remember it took me about an hour to get everything completed. In fact it took me so much longer to get ready than the other kids that I missed most of the Halloween party, but finished just in time to join in the Halloween parade outside. The costume was pretty thorough and included a separate section on how to make Wolfman hands using a cut up wig and rubber dishwasher gloves! The facial makeup itself involved surgical adhesive which took me about 2 weeks to remove from my face! But, hey, it was well worth it! The hair I used to glue to my face was from an old wig my Bubby (Google it) gave me which she no longer used. 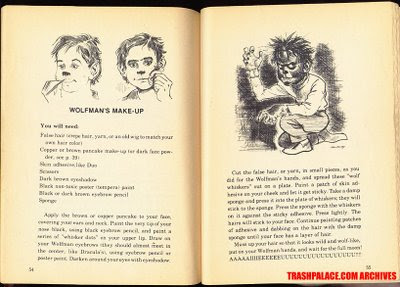 All in all a pretty complex looking work if I did think so myself! The other kids were all pretty exited by it too, I seem to remember. The again it might've just been all that sugar we were eating. Who knows! But there was no question that this was the best Halloween costume I had ever made. I enjoyed it so much, in fact, that 4 years later I did it again! By 9th grade, however, I was getting too old for Trick-or-Treating so I dressed up as a Wolfman and hid in the bushes at our house to scare the visiting kids! This way there were many leftovers and thus I could still score a lot of candy!

Below is a very short silent Super 8mm film clip of me taken in 1979 the second time I did the Wolfman makeup. I was 14 years old, just going on 15. It runs about 20 seconds. Look closely and you'll see my plastic fangs start to slip out!


Years later it was no surprise when I discovered that the author of "Movie Monsters", Alan Ormsby, was the man responsible for some very cool horror movies and creature makeups! In 1972 Ormsby had written, acted and done the great crusty zombie makeups for the "Night of the Living Dead" inspired film "Children Shouldn't Play With Dead Things"! And in 1974 Ormsby wrote, directed and did the grisly makeup for the bloody Ed Gein bio-horror pic "Deranged"! Funny, somehow Scholastic books missed mentioning these bits of info in the book! I wonder why? In 1974 Ormbsy would also write and do the makeup for "Dead of Night" (aka "Deathdream"), an effective low-budget horror tale inspired by W.W. Jacobs' "The Monkey's Paw" story. Ormsby would go on to work on more mainstream Hollywood films, including writing the scripts for the hits "My Bodyguard" (1980) and the "Cat People" 1982 remake starring Nastassja Kinski and Malcolm McDowell. After "Deranged" Ormsby would not direct again until 1990's "Popcorn", a fun slasher film set in a theater running old b-movies with a nod to the William Castle gimmicks of the past. As much as I appreciate his movie work though, I'll always worship this guy for the "Movie Monsters" book. It had quite an impact on me and, I'm guessing, some of you too! For such a little book, "Movie Monsters" sure had a LOT of bite!


YOU DIDN'T AXE FOR IT! #3
Okay all you boils and ghouls out there in Trashland! As a special Halloween bone-us I am giving away an original copy of the "Movie Monsters" book that I found recently in the Trash Palace crypt! Yes, you can win this monstrous masterpiece! Howl you say? Here are the rules: Below is an assortment of 10 werewolf faces. They are all pieces of the original advertising art from different werewolf movie posters. All you have to do is be the first person to correctly identify which movie each face is from! Dog-gone-it, I didn't say it was gonna be easy! Submit your answers as a comment and whomever is the first to correctly identify all of them wins! (If you have trouble submitting the comment you can also email your entry directly to me at brian@trashpalace.com .) Remember to click on the picture below to enlarge it. And if no one wolfs down the prize after a few days, I'll start leaving some clues! Good luck to everybody!

Really cool!!
I'm working on the titles!!
You didn't change a hair!

The Vicar of VHS said...

Hey, Brian, here's my answers for the contest--hope I'm doin' it right...

3. The Boy Who Cried Werewolf

6. Werewolf in a Girl's Dormitory

7. Curse of the Werewolf

9. An American Werewolf in London

Well, we already have a winner! I received this entry from Tim H. who was very close:

I couldn't get all ten, so I'm emailing you instead of posting a
partial solution on the blog.

1.
2.
3. The Boy Who Cried Werewolf
4. Werewolf of Washington
5. Werewolves on Wheels
6. Werewolf in a Girls' Dormitory (aka, The Ghoul in School)
7. The Curse of the Werewolf
8.
9. An American Werewolf in London
10. The Wolf Man

Hints? Number 8 kinda looks like it could be Richard Kiel, but I don't
remember him an any werewolf movies.

Well, looks like we have a winner already! Congrads to the Vicar of VHS! If you see his post above he is right on the money! Boy, that was fast too! Okay,... for the next contest I'll have to make it a tad bit more difficult! In the meanwhile, good job Vicar! Enjoy the book!

I love that film of you! So cute. I have the Ormsby book, too! I picked it up more recently, though, just cuz I'm a huge fan of Deranged.

Hey! Where is Christopher Lee and his crazy glasses from "Howling II: your sister is a werewolf"? I know it's the eighties but I still like the song!

Congratulations to the winner!

#2 is Paul Naschy,#9, American Werewolf in London and,uh, well I will refrain from any Freudian analysis of the video