THE HORROR, THE HORROR... REALM, THAT IS!

This weekend, from Friday September 18th to Sunday September 20th, Trash Palace will be at the Horror Realm convention in Pittsburgh South, Pennsylvania! Horror Realm is presented by the same freaky folks that brought you Zombiefest in 2007 and 2008, the cast and crew of "The It's Alive Show". I'll have a table there all weekend selling lotsa' rare movies on DVD and other ghoulish goodies! Also coming along with me is the Trash Palace pooch Bella Buttons with her Box Of Bargains! WOW! Convention guests include Ken Foree from "Dawn of the Dead" (1979), "The Candyman" himself Tony Todd, and David Naughton, star of "American Werewolf in London"! Also appearing is Jeff Lieberman director of "Squirm" and "Blue Sunshine", several zombie actors from the original 1979 "Dawn of the Dead" and many more actors, authors and artists! There will be several cool contests, guest panels, film screenings and a poolside party on Saturday night featuring a live performance by the terror-ific sounds of The Devilz In The Detailz!

If you're in the Pittsburgh area this weekend come on by and say HELL-OH! to Horrorwitz! 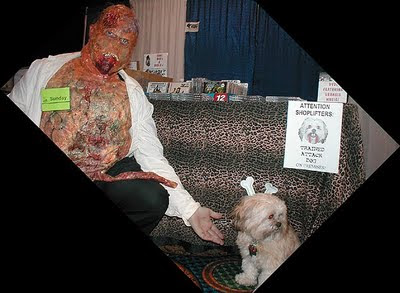 Bella Buttons bravely halts the terrifying attack of a bloodthirsty Fulci-esque zombie at Zombiefest in 2007!
Posted by Brian D. Horrorwitz at 3:45 AM 5 comments: