This is a clip from Cheng Hou's 1977 movie "Shaolin Invincibles" (Chinese title: "Yong zheng ming zhang Shao Lin men") starring Carter Wong and featuring the amazing, ass-kicking gorillas! Does it get much better than this? I ask you?

Posted by Brian D. Horrorwitz at 3:44 AM No comments:

SHORT OF THE MOMENT: "I CREATED LANCELOT LINK" (UNCUT!) 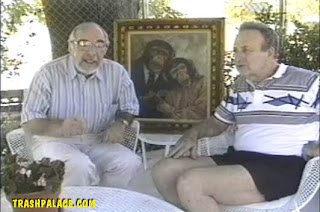 Jeff Krulik has just made available via Youtube the original, uncut version of the great little documentary short "I Created Lancelot Link". Shot back in 1997 (but released in 1999) by Krulik and Diane Bernard and edited by Mark Zuckerman, the short was sliced up like a banana split for the extra's doc feature on last year's "Lancelot Link: Secret Chimp" remastered DVD release by Film Chest. Film Chest did do a really nice job on that DVD compared to Image's earlier DVD release which was much darker and washed-out looking. But they should've just included "I Created..." as an extra unto itself instead of cutting it up and burying it within the DVD extra's own doc. At the very least they should've made it accessible with a chapter stop. In this day and age there's no excuse for that. One gets the feeling that the makers of the DVD's own doc were trying to reap the benefits of Bernard and Krulik's hard work themselves. Jeff was also the one responsible for pointing out to them in 2004 that Tonga, the star chimp who played Lancelot, was actually alive and well and living in an animal sanctuary (not that he received any credit for that discovery). 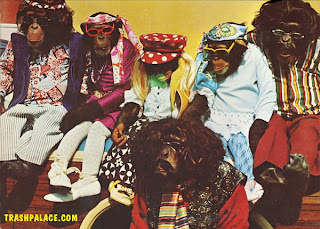 Okay, enough monkey-poop flingin'. Let's get swingin'! In the words of Ed Simian, "It'll be a really big shoooo-oooo-ooooooo!"

Posted by Brian D. Horrorwitz at 8:14 PM No comments: