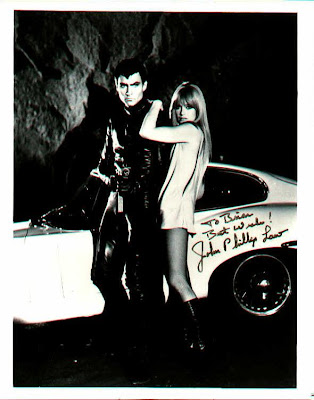 I was just heading to bed and jumped online for a minute and was shocked to read about the death last Tuesday of actor John Phillip Law. A lot of you probably know him as the star of Mario Bava's "Danger: Diabolik!"and Pygar the blind winged angel-man in "Barbarella". Law acted in a lot of other cool films as well including "Eyes Behind the Wall", a pretty twisted Italian thriller from 1977, and "Blood Delirium" from 1982, an over-the-top Italian horror trip. He was also memorable in "Skidoo" and "Death Rides A Horse", but for me I'll always think of him as Diabolik and that unusual character Pygar. I had the pleasure of meeting Law at a horror convention in 1998. My band The Ubangis was playing there on Saturday night. Things were a bit chaotic at the show and it took awhile to set up the band equipment. When the convention was over and I was back home in Maryland the following week I viewed a videotape of the performance. Much to my surprise there was John Phillip Law sitting in front of us on the edge of the stage during our long setup, hamming things up for the crowd. He seemed slightly intoxicated (a lot of people were that night!) and was goofing around for the audience. He had taken one of my big plastic bones that I occasionally drum with and was trying to use it as a sort of baseball bat to keep a balloon up in the air with it, volleying it above his head over and over. I was so focused on getting everything set up that I was totally oblivious to this. At one point he missed the balloon and it went to the floor. He placed the bone down next to him for a second and stood up so he could bend down for the balloon. Right about that time we were getting ready to start so I grabbed the bone off the stage not realising he was using it for his little impromptu comic skit. He returned to his seat back on the stage edge and looked around to find the bone missing. Then he looked up at the crowd and made this sad little boy face. Everyone laughed it up but I was off in another world apparently! In fact I had absolutely no idea any of this happened so seeing the tape was quite a shock! He stuck around for the concert and I could see him in the videotape watching the band and just laughing and laughing, really enjoying himself. Needless to say I went from being a fan of his to a HUGE fan! 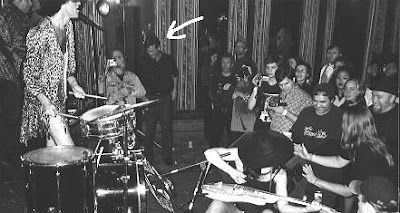 Law and I spoke for a few minutes at the convention. He talked about Marisa Mell, his co-star in "Diabolik" and what a beautiful and sweet woman she was. (Mell had died a few years earlier an untimely death at only 53 years old of cancer.) The fun thing about these conventions is that sometimes you really get to feel that you touch with a "celebrities" personal side, and Law was one of the first for me that I had met. You could tell what a personable and down-to-earth fellow he was really was despite seeming larger then life flying through the sky with Jane Fonda in "Barbarella". Law still looked great the last time I saw him and so it's hard to imagine he's gone. Having made so many fans over the years, from his cult movie roles as well as his convention appearances, he will be missed by many!

Posted by Brian D. Horrorwitz at 3:21 AM

Thanks Brian,
I am still bumming hard about this.
Thanks for giving me new JPL titles to look up.
I need to see that convention video!

Sometime I'll have to transfer that video clip and post it here. I recall it was pretty hilarious.

I loved him in DEATH RIDES A HORSE and thought he was a very powerful presence opposite Heston in THE HAWAIIANS. He could convincingly convey rage and despair with the best of 'em.
R.I.P.

Which video do you mean California?

The film in the clip, Diabolik and in the other clip The TOuchables

"Danger: Diabolik" is out on DVD and you can find it online from places like xploitedcinema.com . "The Touchables" has never had an official release but you can buy a nice looking copy from Trash Palace. Check out this page: