TUNE OF THE MOMENT: "DOUBLE BUBBLE BATH" by THE JOE RENÉ COMPLEX 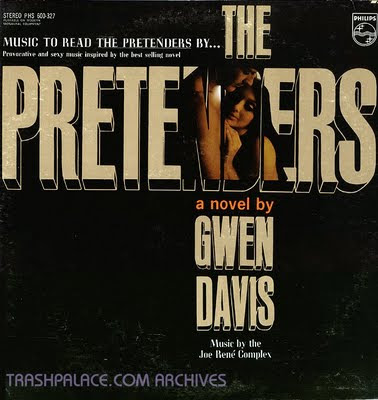 Our first tune is a poppy little instrumental ditty, presumably from 1969 or 1970, the full title of which reads "Double Bubble Bath (Music To Read Page 311 By)". It's taken from a way-cool LP called "Music To Read The Pretenders By" by The Joe René Complex on the Philips label. The entire album is a thoroughly good listen if you are into groovy pop music. Another standout track, a funky number called "Rank Out", has shown up on a few other blogs, so I present to you this bouncy more easy-going but just as cool number. Laden with rich horn harmonies, there is a slightly complex middle part that reminds me of some of Frank Zappa's jazzier instrumental works. I dunno what (or who) was going down on page 311, but someone was having a swingin' time! Overall "Music..." is an interesting concept LP, a sort of fake soundtrack for the racy novel that was rather popular at the time. I myself have never read "The Pretenders" but after seeing some of the other song titles on this LP ("Menage A Tois", "Mirror On A Mexican Ceiling") I may have to track it down! 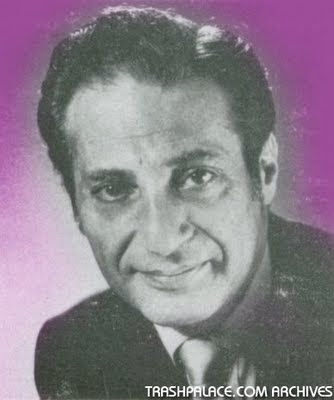 Joe René
According to the liner notes Joe René was born in Holland in 1924 and was a trumpet player and band arranger but was forced to go into hiding as his career was "interrupted by Mr. A. Hitler"! After the war he became a musical director for the US Army. In 1948 he came to the US and went into arranging and producing big bands for radio, tv and recording. If soundtrack-esque pop music circa the late '60s is your thang, track down a copy of this swinging LP and snag it! Mr. René, you cool cat you, I hereby give you and this record the official Trash Palace 'Groovy Factor' seal of approval! Alright.... now click it and dig it!

If the player above doesn't show in your browser you can also play the track on your Windows Media Player by clicking here.
Posted by Brian D. Horrorwitz at 3:18 AM

What are we clicking? I don't see a link!

There should be a little mini player at the very end of the article, right after "now click it and dig it!". Let me know if it doesn't show up.

You and Joe Rene look much alike, and you're both musical talents. You the offspring of his offspring? I wouldn't be surprised.

I don't see a link either.

Okay, thanx to Max we were able to figure out that the song player thingy doesn't always show up in certain web browsers. SOOOOO I've gone back added another link where you can play it from your Media Player.