This time around I present to you this mystery photo below (click on it to enlarge): 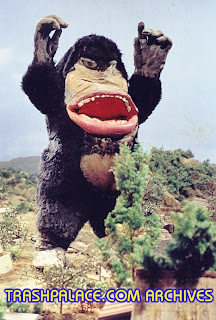 Who... or what... is this? Is it King Kong's bigmouth cousin from New Jersey? A Christmas toy for bad children? A possessed urinal? What, I ask you, what!!?? I will be really surprised if anyone comes close with this one! The answer posted soon!

EDIT (Friday, Sept. 19th): The answer has been posted in the comments!
Posted by Brian D. Horrorwitz at 5:08 AM 7 comments:

Labels: chimps, monsters, you didn't axe for it

Break out the Ritalin, kids! The Banana Splits are returning to television! Yes, you heard right! The new Banana Splits shows are scheduled to slip onto your screen sometime in September on the Cartoon Network and Boomerang channel, although I am not 100% clear if these are to be full-length programs (as they were in the '60s) or "shorts" thrown into commercial breaks during pre-existing shows. I can though say that, after taking a look at their orb-popping website , they seem to have done a good job emulating the old Sesame-Street-on-LSD style but cranked-up with a bit of speed for the new ADD generation. Whether or not resurrecting Beagle, Fleagle, Drooper and Snork from Kiddy TV Pergatory is a good thing depends on if you liked the show to begin with. I myself was a pretty big fan although I'd probably have taken "Ultraman" over them any afternoon of the week. I did convince my Mom to let me send in the Poptart boxtops for the set of Banana Splits 45s which I still have (what's left of them). As for the show itself, I always dug the live-action bits with the Splits running around slapstick-style while a barrage of Hannah-Barbera stock cartoon sound fx boinged and popped throughout. I also liked the groovy songs and the jungle live-action "Danger Island" sequences. But some of those particular cartoons just didn't quite do it for me. Even as a young kid I was mostly bored by those, they always seemed like filler to me that I had to wait through to get to the "good stuff"! It'll be interesting to see what kind of 'toons (if any) the new show has. There are reports that Warner Brothers (who owns the rights) are already getting ready to market new Splits products including a CD with all-new tunes (titled "Go Bananas Your Way"), a DVD and... yes, a live tour! Hmmm... Maybe I can actually make it into this one! I was stopped at the gate at both Hilary Duff and Miley Cyrus concerts. (Apparently there is some silly rule about wearing raincoats indoors when it's not raining outside. How was I to know?) And now with the Banana Splits resurrected, I ask you... can The Bugaloos be far behind? One can only dream.

Below you can compare the old and new Banana Splits. They look pretty much the same to me although Beagle appears to have lost a few pounds. Also Snorky seems to have much shorter hair now and looks less freaked-out then he did in the '60s. But, in his defense, it was the hippy era after all. Rumor has it that due to many bad trips he had gone the way of Syd Barrett but, after several years struggling in rehab, he has reportedly cleaned up his act. Good on ya Snorky! Tra-la-la, la-la-la-la... 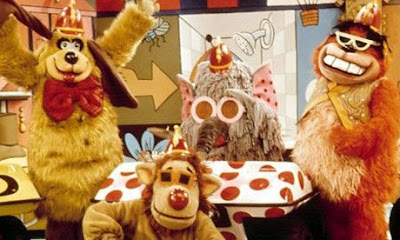 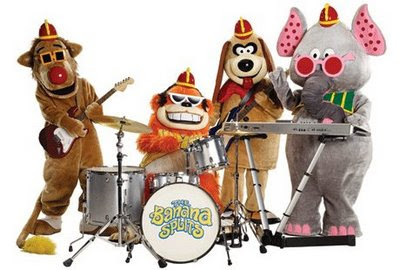 For more info and a LOT of flashing colors, loud sound effects, moving thingies, groovy songs, nutty games and many video clips check out the official website at http://www.bananasplits.com/ .
Posted by Brian D. Horrorwitz at 6:49 AM 6 comments: